An excerpt of  the 2015 Project Playwright presentation of the lighthouse invites the storm, with Kristine Doelling as Irene and Curry Whitmire as Quinn.

In the midst of a difficult pandemic year, Rover Readings found The Beeping off of NPX and put on a delightful virtual reading (with just one moment of technical difficulties!). The whole thing lives for as long as Facebook allows here.

The ridiculously prolific Adam Szymkowicz interviewed me as part of his I Interview Playwrights series.

Zach Calhoon's blog Visible Soul featured me within its People You Should Know. For the record, it would be nice to meet you, whoever you may be.

Kindly reviews of the lighthouse invites the storm from StageBuddy and Theatre Is Easy.

Kanjy isn't the most active site in the world (it's a gathering point for writers) but you can read excerpts of a few plays of mine here, and I intend to update eventually.

Kanjy also tagged me as one of their writers of the week in March, which was nice, even if being named the Anything of the Week makes me mostly think of that one inanimate carbon rod. 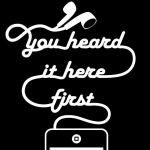 You Heard It Here First performed and produced monologue/soliloquy piece of mine, Miranda Under The Volcano, into podcast form, a format I think can be rather lovely for plays with a certain sound. You can hear it right here as the first of their March Monologues; they also did a short interview with me that is available here.

Tumblr is a fun and stupid interface, and mostly for my own stupid fun I actually use it to post a decent amount of writing. (On a site designed for the sharing of Kendrick Lamar remixes and Katy Perry gifs, yes. I'm aware.)

50 Golden Rap Failures is a sardonic take on some of the worst moments in hip-hop history, from Miker G and DJ Sven to three infamous Fruity Pebbles commercials. I particularly recommend you all hear/suffer through "Livin' De Life" by...some casino exec.

Instagram isn't, theoretically, a text medium, but I use it as an opportunity for clever captioning and topost my stories from 3rd grade. I'm on Twitter as well, but take no particular pride in my vices.